Of all things, I don’t believe I have ever sprouted an avocado pit.

Changing that now. I seem to have time on my hands. 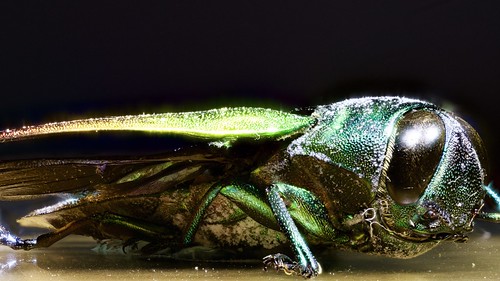 At left is a photo of a Belionota sumptuosa from Indonesia. Commonly known as a Tricolor Metallic Wood-boring Beetle.

It isn’t a regular photo, though. It is a focus stacked image.

Specifically, it is 276 photos combined to make a single image. When shooting macro, the depth of field — the distance in front of the lens that is in focus — tends to be really narrow. By taking a bunch of photos where each has a different depth in focus and then combining only the in focus areas from each image, one can effectively create a composite image that is entirely in focus.

END_OF_DOCUMENT_TOKEN_TO_BE_REPLACED 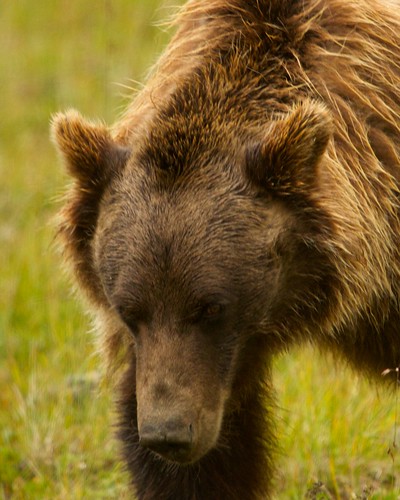 For the Alaska trip, we opted for the 11 day grand tour.

Beyond a fantastic tour of glaciers, a backcountry lake lodge, and Denali National Park, highlights included fantastic lodging in the most remote of places, incredible homemade meals, mind blowing scenery, and a wonderfully friendly group of random travel companions that quickly become a temporary family (with whom we wouldn’t mind crossing paths again!).

It was, no surprise, a great place to take photos and I’ve pushed an album to Flickr.

On our tour, we ranged from a coastal rainforest to arctic tundra and even spent some time in the air flying around Mt. Denali.

And that covered a very tiny part of the state. It is also hard to fathom just how big Alaska truly is. Watching this glacier calve, we were nearly 1 mile away from it and yet it still seems to tower above us and there were still miles of glacier behind and above it! And beyond the top of that glacier? An ice field that is larger than most states in the lower 48.

Alaska is very different than anywhere else we’ve visited. Whereas the Amazon was full of a seeming infinite number of species of plant an animal, there are actually very few species in Alaska; only 150 or so native plants have been cataloged (with many variants within those particular individuals).

While in the rainforests of the equator, things rot with incredible speed, trees may lie on the ground in the Alaska rainforest for years because their simply isn’t the warmth or sunlit energy to support the decomposing agents. Thus, the Alaskan rainforest floor is a thick layer of, well, mulch on top of rock. Springy, almost magical to walk on. But no real dirt.

And some of the seemingly most innocuous and beautiful plants are quite deadly.

Even the mosquitos are different. In Alaska, the mosquitos are the top pollinator. All those incredibly yummy tundra blueberries, cranberries, and crowberries? Pollinated by mosquitos. Still annoying critters. But mosquito defense did lead to some interesting fashion statements.

A fantastic place to visit! 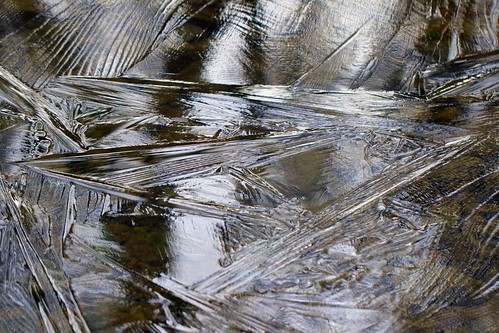 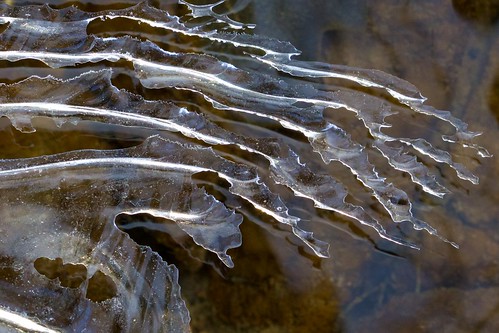 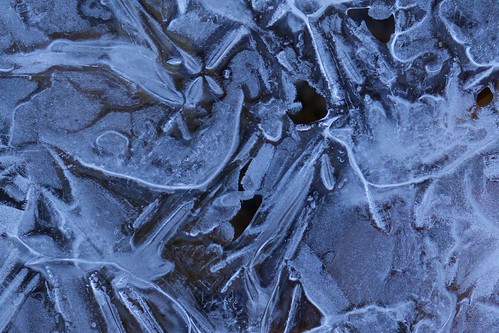 While walking on the creek, Roger and I found lots of different patterns of ice on the creek. There simply wasn’t any smooth ice anywhere.

Some were on the surface of the water. Some floated above. Some were clear, others were not. All were beautiful. 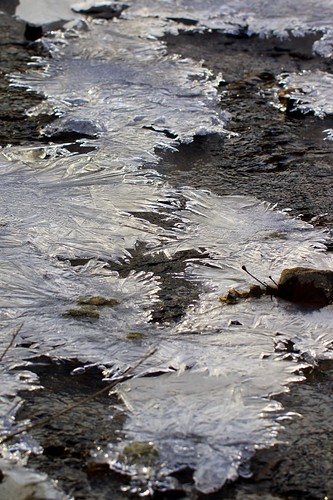 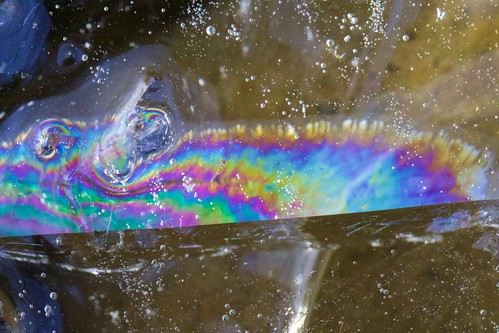 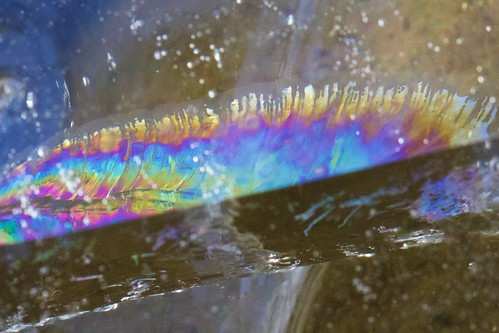 As Roger and I were walking along the frozen creek we were (duh!) throwing rocks to break ice, stomping on the ice, and generally checking out all the neat patterns that naturally occur (including the ice lens and another post that will highlight the amazing fractals that occur naturally).

When looking closely at some of the cracks, I noticed rainbows. Rainbows everywhere! They were typically formed right along the cracks and I had assumed they were the result of stress in the ice.

They are actually, as @maclemon kindly shared on Twitter, examples of Newton’s Rings.

I’m not smart enough to grok the Wikipedia entry entirely, but armed with that, I was able to search for other discussions.

Here is someone who ran across them in their backyard and did a bit of research.

And here is a whole discussion of the phenomena with lots of studio photos.

I may add some more photos if I happen to see some neat patterns. Because, clearly, more ice shall be broken. 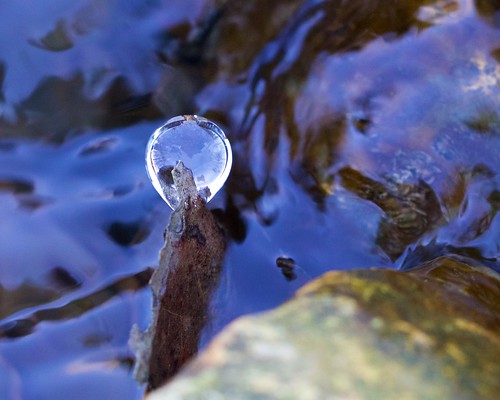 Roger and I went for a long walk near my parent’s house in Columbia, MO. Being the end of the year, it is freezing cold and still. Ideal weather to produce ice on the ponds and creeks of the area.

While walking on the creek, we noticed that a couple of leaves had formed little balls of ice on the end of them. The ice was perfectly clear and the shape was quite regular. 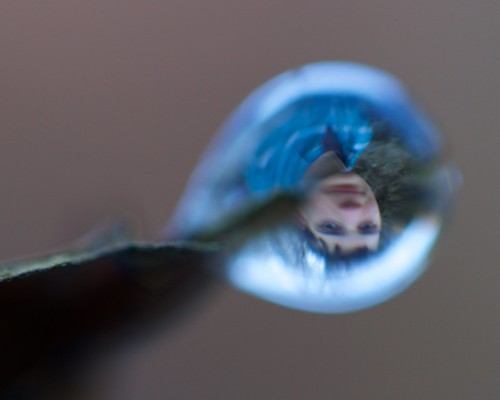 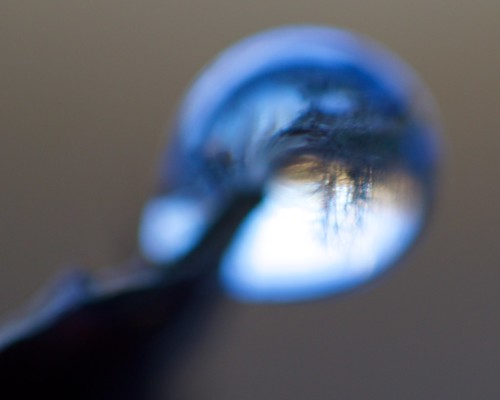 Sure enough. It did act as a lens!

These were shot with a 100mm macro lens on a Canon 7d Mk II (my christmas present). 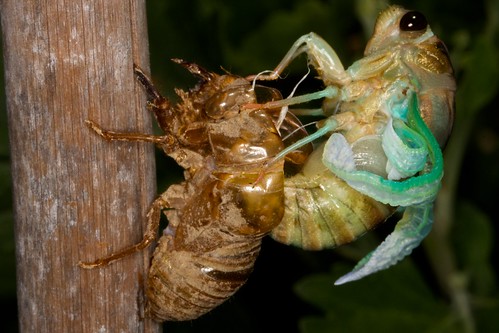 “Hey, Dad! There’s a cicada emerging over there.”, Roger said.

Watching the emergence of any critter that goes through a metamorphic stage is always fascinating. While Roger (and I) have raised many butterflies (and Roger has raised quite a number of other critters), we’ve never watched the emergence of one of the annual cicadas common to the Midwest.

When an insect emerges from its metamorphic container — be it a cocoon or, in this case, the harden shell of the larval stage — it is typically quite vulnerable.

If winged, there is a long period of pumping fluids into the wings and then letting them effectively cure in the open air.

It is a particularly vulnerable time exactly because the animal is in between forms and simply can’t move.

Some of the original images at full resolution are really stunning. This is a beautiful creature.

In this first image, the critter has just emerged. The wings are just starting to unfurl. 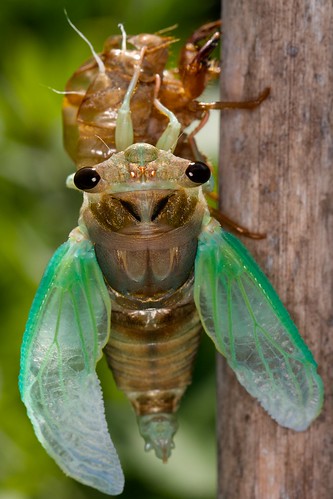 At this point, the cicada has fully emerged, but the wings are only partially expanded.

I was very surprised at how stunningly neon green the wings are! 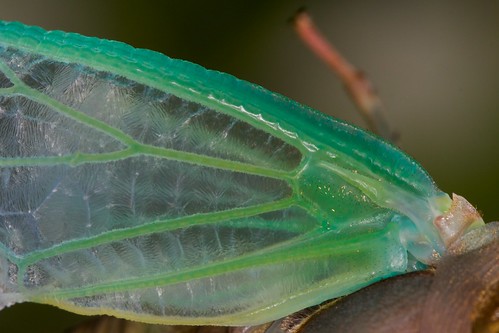 This is a closeup (rotated) of the expanding wing. Note that those wings will be largely transparent once they are fully expanded and cured. At this point, though, it almost looks like frost. 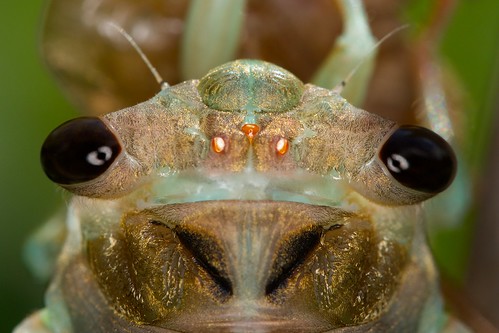 This just seemed like an obvious picture to take. 🙂 From this angle you can’t see all the facial hair!

That picture will be at the end. 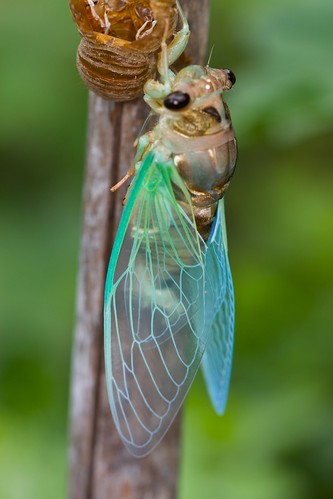 At this point, the wings are fully expanded, but not yet cured.

The neon is just stunning. Surprisingly so. Gorgeous. 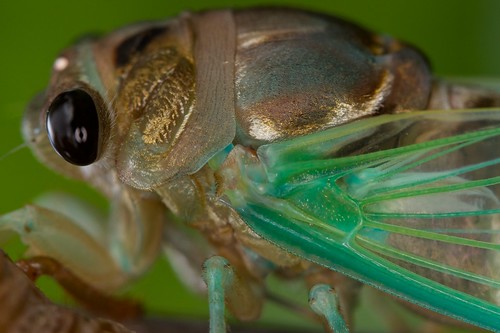 One final shot. The cicada flew away shortly hereafter (or crawled).

I was stunned by the golden highlights on the “shoulder” and the hairs around the eyes!

What a beautiful creature!

After nearly 5 months, the first run of herbs in the Aerogarden were finally tired to the point of no longer useful (I started with AeroGarden Gourmet Herb Seed Kit (6-7-Pod)

and it worked really well — way more than $18 worth of fresh, tasty, results). One of my goals with the Aerogarden is to gradually replace all the pieces until I’ve effectively created a homebrew Aero-Hydro solution that will eventually integrate with our atrium’s pond (fish poo fertilizer FTW!), use LED lighting, and, hopefully, be an interesting conversation piece.

The next obvious step was to replace the seed pods and baskets. The seed pods/baskets are the one piece that needs to be replaced with each planting. The baskets — white plastic things that fit in the holes on top of the Aerogarden — can be mostly reused, but the original design is obviously optimized for cost, not effectiveness (they don’t actually fit correctly in some of the holes!). The seed pods, themselves, are little bundles of seeds in growing medium; Aero’s are good quality, but relatively expensive and the seeds are of unknown variety (i.e. generic curly parsley and not some particular strain).

At left is the current phase; seed pods and growing medium replaced with Basil sprouts showing some signs that it is working!

END_OF_DOCUMENT_TOKEN_TO_BE_REPLACED

This is our AeroGarden after a couple of months of growth. It is currently growing savory, mint, basil, thyme, parsley, amaranth, and oregano. The Aero works really really well. Within the water reservoir (the big black thing under the plants), it has a pump that pumps water with nutrients over the roots of the little growing pods that stick through the holes in the deck around the plants. Surprisingly, the thing makes virtually no noise.

Once every week to 14 days (not sure how often), it reminds you to add nutrients and it has a water-low indicator. While the seed kits from Aero include nutrients, I’ve been using the worm tea from my son’s worm farm.

Quite nice to have a nearly non-stop supply of fresh herbs next to the kitchen!

I would never have otherwise bought such a device, but we ran across one at a garage sale for $5. Quite a hefty discount off of the $150 new price. It did need some new lights.

I picked up one of the Aero branded seed packets so I could go through one grow cycle by the book, as it were.

$150 seems a bit steep and seed kits are another $20, typically. However, if you truly will use all the herbs, then I would think the thing would pay for itself long before it wears out. Annoyingly, the light sockets are of an esoteric standard and ordering new lamps from Aero is ridiculously pricy. Razor meet blades, assuredly. However, it isn’t hard to rewire it for standard CFL grow lamps (you want CFL to avoid burning the plants at such close proximity).

END_OF_DOCUMENT_TOKEN_TO_BE_REPLACED Roger and I went for a walk around Sanborn County Park over the weekend.

A wonderful park situated in the Santa Cruz mountains. Full of wildlife, too. One of the main gathering areas has a wonderful creek that flows through it with several pools. It is quite common to see tons of salamanders, newts, ducks, and other critters!

A favorite place of Roger’s!

As he has gotten older, we have ventured further from the ponds to explore the critters living in the rest of the park (in the fall, there are typically hundreds of mushrooms all around).

On our most recent trip, we ran into a rather large beetle hiding under a log. Roger, being the fearless explorer that he is, was quite happy to pick it up, despite the rather powerful jaws on the front end.

Turns out this critter is a Jerusalem Cricket (Orthoptera Stenopelmatinae). Sadly, a lot of people see such a creature and immediately assume that it is a bad bug. In researching this creature, we discovered several articles that implied that they were invasive species or were pests.

Nothing could be further from the truth.

The Jerusalem Cricket spends almost all of its life underground. The critter feeds on dead animals, rotting vegetation and leaves.

It pretty much only comes out when seeking a mate.

While the cricket does have very powerful jaws and can delivery a rather painful bite, the animal is actually quite docile. Jerusalem crickets are not predatory, content to remain hidden away anywhere it is moist, dark, and protected.

As it turns out, the Jerusalem Cricket is actually quite common west of the Rocky Mountains. They just do such a good job of staying out of the way that they are generally a rare site!

With the addition of automatic sprinkler systems in otherwise arid areas like Silicon Valley, the Jerusalem Crickets have become a more common site in residential areas. If you see one, please be nice. It has an important job and your yard will be healthier for its presence!